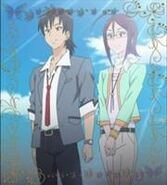 Jun with his fiancée in front of his deceased parent's grave 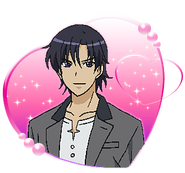 Jun is the person who scouted Aira. It seems that he can see star aura. He also seems to know about what will happen in the future. He believes that Aira, Rizumu and Mion were all destined to be with each other. He is usually seen with President Asechi. He recites poems that Aira and Rizumu are clueless about while only Mion seems to understand what they stand for. He is 24 years old and seems to be the object of Mion's love. He seems to have understood why Aira was doing so well in Episode 4's Prism Show by calling it "youth". He seems to like to hint that something will happen later on. In Episode 26, he had Aira, Rizumu, and Mion make a huge gyoza for the president so that she would be rejected at the marriage interview for having a weird smell. When the girls presented the big dumpling to the president, she replied saying "It's a Takigawa joke." He is actually half siblings with Kyoko Asechi, born by the same mother but different father head of Pretty Top in the anime, Pretty Rhythm Aurora Dream, and it's sequel, Pretty Rhythm Dear My Future. He is very poetic, not just in Japanese, but in English as well. He randomly spouts English words most any time he talks with a very good accent. He is greatly admired by Mion, who had a crush on him. Above all, he cares about Kyoko's safety and happiness.

Made by: miral1 and edited by ChrisKaname