The Callings is a popular boys idol unit. The members include Sho, Wataru, and Hibiki. They give advice to Aira, Rhythm, and even Mion at times. They are good at dancing, singing, and teaching education especially Wataru. They seem to have taken a liking to the members of MARs. They released two songs, 1/1000 Eternal Aesthetics and Tinker Bell's Love.

Shō (ショウ?) Leader of the boys idol unit group Callings. He has brown hair and violet eyes. He is also the designer of Prism Stone Aira's favorite shop. He is a reliable leader and tends to give Aira advice from time to time even though he can snap sometimes. He is in his first year of high school along with Hibiki and Wataru. He finds Aira interesting. It is shown that when under pressure he can snap like he did at Aira when she talked about his design for his upcoming deadline. It is unknown for now whether he has feelings for Aira or not despite the fact that he seems to give her the most attention out of all the girls for now. He went on a date with Aira to the fireworks festival after being split up with Mion and Wataru. He had asked and given Aira advice on what her dream really was. Shou kissed Aira's forehead in the first episode after she performed her very own prism jump and fell on him. He is impressed by Aira's fashion sense and likes to tease her. He went on a date with Aira to the fireworks festival and made her blush 4 times. He said something to Aira's ears during the fireworks which she didn't hear. He kissed Aira's forehead after she fell on him in the beginning of the season.It is surprising to reveal that he is actually afraid of dark places but was about to say something to Aira until Mion's scream and Rizumu cut him off. He called Aira's father, Hiroshi, father in episode 30.(Voiced by Takashi Kondō)

He is part of the idol group Callings. He has blue hair and brown eyes. He is in his first year of high school. He may be a playboy but likes to tease Rizumu. He may have feelings for her. It is revealed that his younger sister is Kanon Toudou, who beat Aira and Rizumu in the Summer Queen Cup. He also gave Rizumu advice when she wanted to win the Tiara Cup and stopped having fun. He went on a date with Rizumu to the fireworks festival and even bit into some of her candy apple making Rizumu turn bright red like the candy apple. He had also went to the wish granting kappa with Rizumu to which he told her that he was relieved that she isn't trying to do the Aurora Rising for a boy she likes which suggests that he likes her too. He is very nice to everyone and seen to be with Rizumu whenever she is eating. He went on a date with Rizumu to the firework's festival and likes to call her a cute girl. (Voiced by Kenn)

He is also a part of Callings. He is in his first year of high school with Hibiki and Shou. He has red hair and green eyes. He thinks of himself as Mion's older brother. Despite his cute appearance, he is actually very good at studying and helped Rizumu to overcome her problem with her schoolwork. It is unknown whether he and Mion have feelings for each other. He enjoys working as an idol with Shou and Hibiki which he has told Mion. He and Mion went to the fireworks festival together despite the fact that Mion only wanted Wataru to carry her prizes. He is also shown to have given Mion advice on Aira and Rizumu's birthday party which made him stretch out her cheeks. He does care for Mion though. When he found out that Mion was afraid of monsters and ghosts he promised to protect her which Rizumu thought was the beginning of their love story. He is actually very smart and gets good grades in high school.(Voiced by Nobuhiko Okamoto) 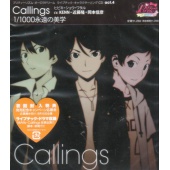 Add a photo to this gallery
Retrieved from "https://prettyrhythmauroradream.fandom.com/wiki/Callings?oldid=5147"
Community content is available under CC-BY-SA unless otherwise noted.